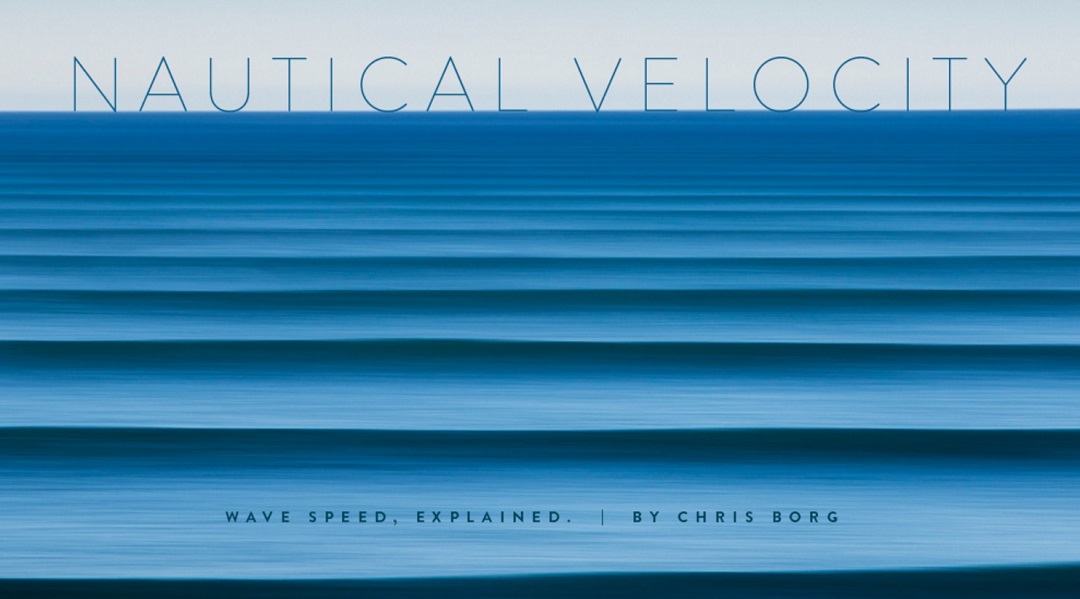 The sun is the source of all surf.

Waves of solar energy are transmitted through space, absorbed by the Earth’s surface, emitted up into the atmosphere as heat, transformed to kinetic energy of wind, and then transferred into the water to form ocean waves. In the vacuum of space, all the sun’s radiant waves travel at just one speed: the speed of light (186,000 miles per second). In contrast, the speed at which ocean waves move is determined by various properties of the waves and the water they propagate through.

From Wind to Waves

All waves are produced in the same manner, (wind blowing on water), but not all waves are created equal. Light winds over a small area for a short duration make little ripples that soon dissipate, while roaring and long-lasting winds covering a major section of sea whip up massive waves which can persist for weeks. Whether minute ripple or rogue monster, the speed of waves is also proportional to the winds that generated them, at least in most of the ocean. 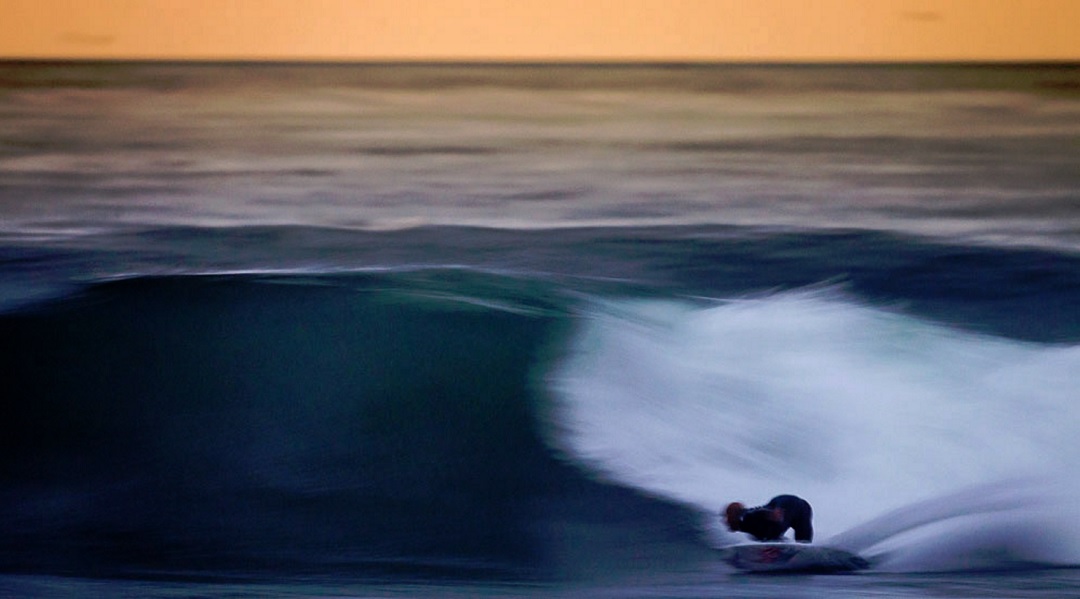 On average, 71% of Earth’s surface lies submerged under 2.65 miles of saltwater. When calculating wave speed, if ocean depth is greater than half of a wave’s length, that wave is classified as being in “deep water”. In such cases, the wave behaves as if it were in a bottomless sea and therefore immune to any effect of a seafloor. Under that scenario, all characteristics of the wave are completely independent only on the wave’s period, which is the time required for one complete wave length to pass a fixed point.

Swell Speed and Wave Speed in a Bottomless Sea

Wind events may generate a wide spectrum of waves with various periods and lengths. Tracking away from their origin, those waves separate out to form wave trains called swell, which travel in groups, or sets, based on their wave period. To determine the speed at which a swell group propagates in deep water, the wave period is multiplied by 1.5. The resulting product is given in terms of knots. Swell groups with wave period of 20 seconds will travel at 30 knots, while swell groups with a 10 second period travel at 15 knots. However, individual wave crests travel at twice the speed of the group itself (like treads on a tank), emerging at the back of the group, peaking in height in the center, and disappearing at the front of the group. So a wave crest with a 20 second period moves at 60 knots in deep water. 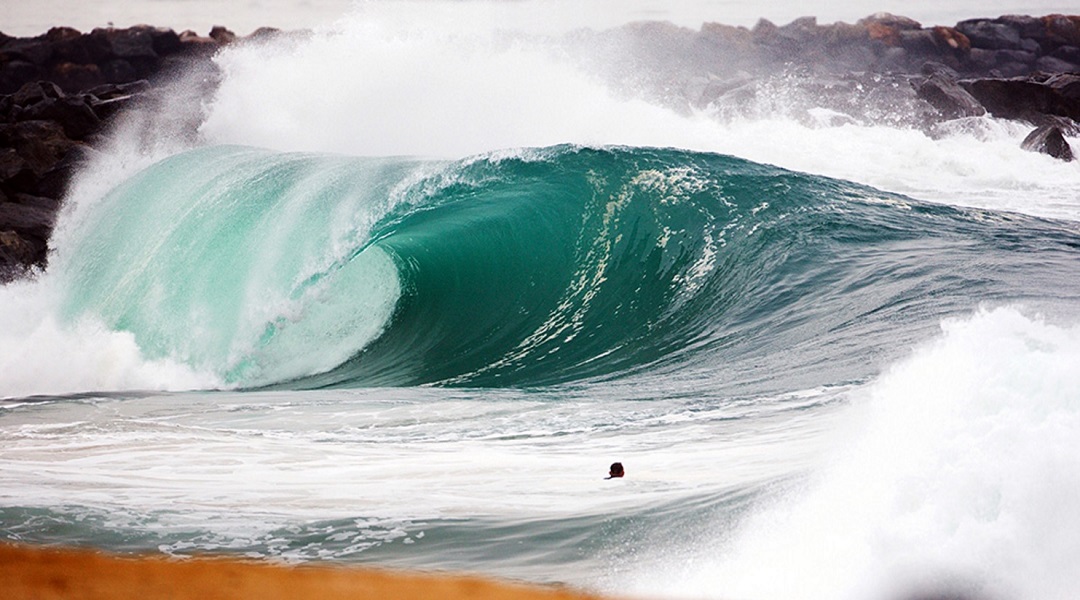 Cyclone Pam was one of the longest-running storms ever recorded, spawning swell from the Central Pacific to Australia, New Zealand, South America, Central America, Mexico and California, seen brilliantly here at the Wedge, with long-period forerunners that spread across the Pacific at over 30 knots per hour.  Photo: Dawson Maloney

The point at which a wave begins to interact with the seafloor is reached when the depth of the ocean is equal to half of the wave length. That ratio of water depth to wave length marks the border of the “Transitional” zone, the area of the sea where wave speed is a function of both wave period and ocean depth. Brushing against the bottom begins to slow the wave slightly at first, but as the wave motion is “squeezed” into increasingly shallow depth range it begins to slow in speed and increase in height (shoal). 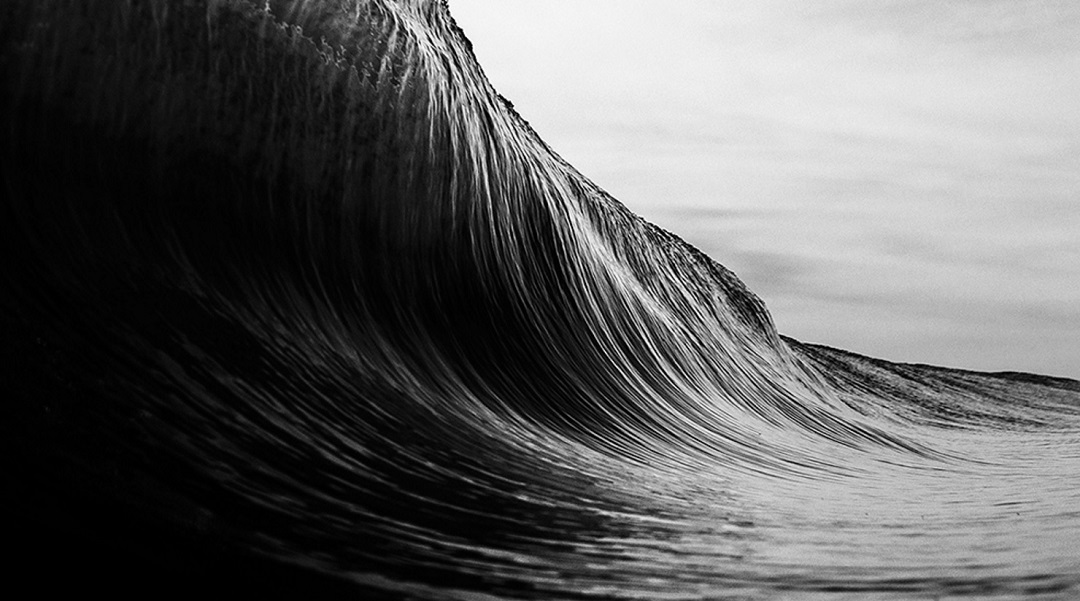 As the wave shoals its speed goes from being primarily a function of its period in deeper water to being solely dependent on the depth in very shallow water just prior to breaking. The shallow-water wave speed is dependent on the depth, and the depth at which a wave breaks is roughly equal to the wave height, so the speed of that breaking wave you are trying to catch is really controlled by height and not period (although the largest heights and longer periods tend to go hand in hand). The larger the height, the deeper the depth where it will break, and the faster it is moving. 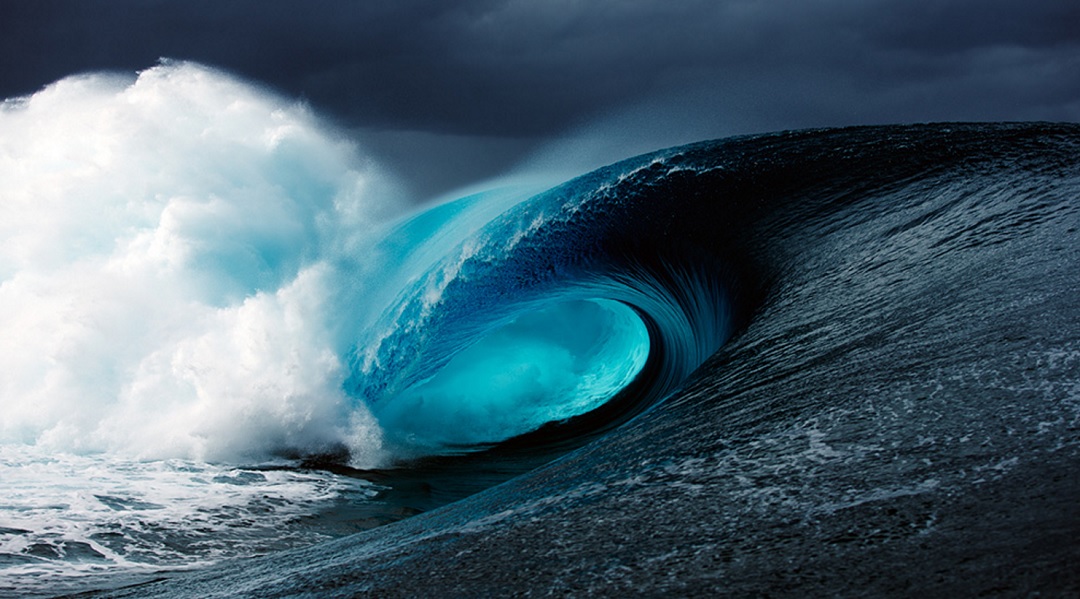 Wave speed is proportional to its period in deep water and to water depth in shallow water. For places like Teahupoo where the water goes from really deep to really shallow and quick – wave speed is somewhere in between a traditional deep water wave and a shallow water wave. So yes, the rumors are true that waves typically move faster at Teahupoo than they do at Virginia Beach. Photo: Ed Sloane

This traditional description of shoaling and wave speed is based on the assumption the water depth is slowly decreasing (relative to the length of the wave) as the wave approaches its breaking point, but there are many surf spots that do not like to play strictly by this rule. Places that rapidly transition to the breaking depth (e.g. vertical reefs and ledges) produce breaking waves faster, hybrid speeds because the wave was unable to slow down completely over such a short distance. By breaking the usual rules of wave dynamics, breaks like Mavs, Teahupoo and Shipsterns make for some unusually dynamic waves.

“The world is full of waves,” Steve Hawk once said. “Light waves, sound waves…but ocean waves are the only ones that move slow enough for humans to ride.” Photo: Pedro Gomes / Video: Travis Kuhlman

Thanks to Surfline for providing this information.