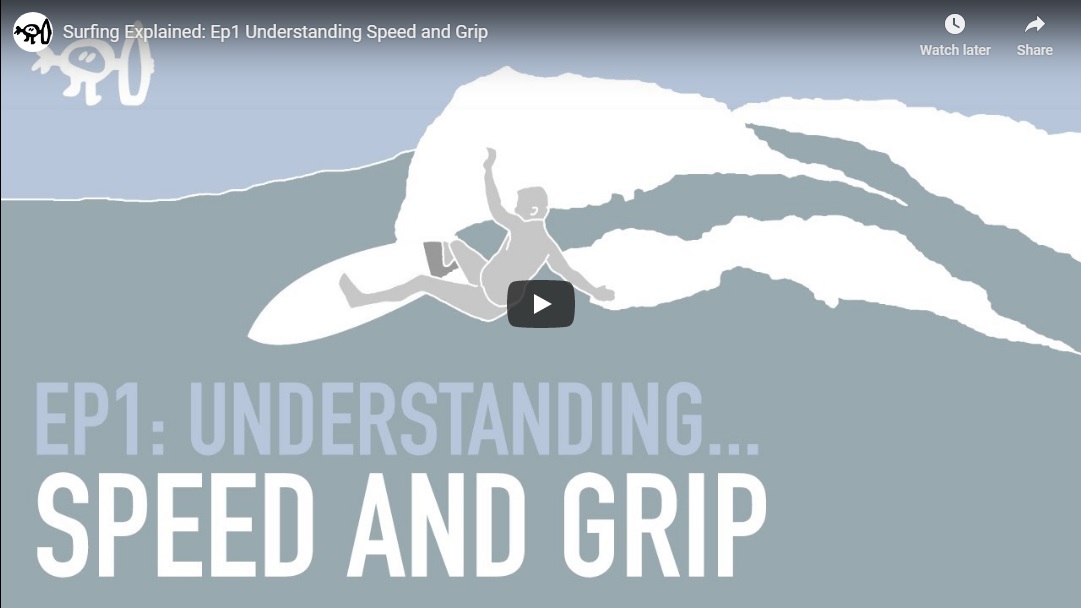 In the debut episode of Surf Simply’s new animated 5 part surf science series, ‘Surfing Explained’, we explore the science and physics behind how a surfboard generates speed by using water flow and gravity, and how you the rider can maximize your technique to improve your speed for maneuvers. This episode was written by Surf Simply Coaching Director Harry Knight, and animated and edited by Surf Simply Coach Will Forster. Season 1 will cover 4 episodes over the next 4 weeks: Ep1: Understanding Speed and Grip Ep2: Generating Speed and Grip Ep3: What is Surfboard Volume Ep4: Using an Online Volume to Weight Calculator Episode 1 Transcript: How does your surfboard actually work? Most surfers simply accept the fact that we paddle into a wave, stand up and ride it, without every really questioning what’s making this happen, or what’s going on beneath our feet. Perhaps when we’re shopping for a new surfboard we might think about the effects of variables such as length, width, volume bottom contours or tail-shape, but for the most part, the majority of us are blissfully ignorant. Even a lot of surfboard shapers – although they’d never admit it – aren’t that wise as to the physics at play when the surfboards they’ve shaped are being ridden; they know what works and that’s what they continue making. A big reason for this is the lack of proper research that has been done on surfboards. A lot of what we “know” about surfboards has been worked out through trial and error, and while a few people have hypothesized the science behind why a board performs the way it does, there is little hard evidence to support these claims. We’re going to try to address some of the core mechanics here and now, and then build on them in future articles the will refer back to the points and principles covered here. Let’s start with; speed. It’s what we’re really after when we’re riding a wave, not just because it gives us a thrill, but all because it’s the raw material for producing good maneuvers. Where does that speed come from and how do we generate more? If you answered Gravity, then you’re partly correct; when you paddle into a wave and drop down the face of it, it is gravity that’s pulling you down and causing you to accelerate, and even when you angle across the wave, gravity is still helping to generate some of your speed. However, if gravity was the sole factor in generating speed, you should go fastest when going straight into the beach, but that’s not the case. Your board actually travels far faster when traveling in trim across the face of a wave, and this is all to do wit how the Vow of water on the wave face interacts with your surfboard. The very first thing that we need to get clear here, is that when we look at an unbroken wave, it is mostly wave energy that’s moving, not the water. If you placed a rubber duck on the surface of the ocean and watched a wave pass, the rubber duck would just rise and fall as the wave passed underneath; it wouldn’t be picked up and carried by the wav A good way to think of it is to imagine a blue tarpaulin, and then roll a bowling ball underneath it – you would see the “wave” of the bowling ball moving under the tarp but the actual tarp itself remains in the same place. However, if we were to follow the bowling ball with a camera, we would see the canvas rushing past, and the same is true if you travel with a wave in the ocean. This creates what we call an “Effective Flow” of water running up the face from the perspective of the surfer. When we take off on a wave and set our rail to start riding across the face, our surfboard interrupts that apparent flow of water. Two things then happen: Our surfboard grips the face of the wave, and the surfboard generates Lift and forward Thrust. Depending o exactly how the board interacts with the water Vow, the amount of lift, thrust and grip can be varied to suit the maneuvers we’re trying to do on the wave. In the next episode, we’ll be talking about the physics involved in this process. Until then, thanks for watching.